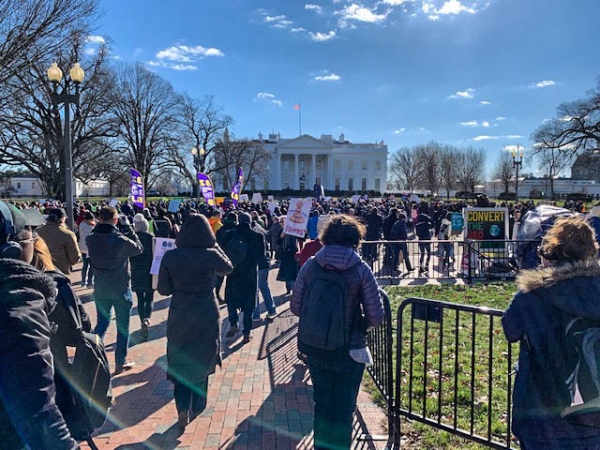 ENARDEN, Md. — Every week, a good brother in Christ reminds me to pray for those who have “unspoken prayer requests.”

I know we’ve all been there. We have trouble burning in our souls, but we just can’t bring up the courage to give voice to our needs — even in the midst of our church family.

We have brethren who work government jobs they can’t talk about. (They’ve almost stopped taking my phone calls, afraid that I’ll quote them in The Christian Chronicle.) I also have interviewed people who worship with various denominations for pieces I’ve done for other publications.

They’re all hard workers who put in the effort to get where they are.

They’re proud of the work they do. It’s hard for them to ask for prayers, I think.

I hope there’s some way we can really let these people know that they’re not “nonessential” to us — and they’re definitely not nonessential to God.

But I see the concern in their eyes. Little by little, their savings accounts are dwindling. They’re eating beans cooked in Crock-Pots instead of dining out. They’re asking their mortgage companies for more time.

All the while, they’re being told that they’re “nonessential.”

Nancy Clark is one of them. I talked to her for a piece I wrote for Washington City Paper.

Normally, she would have had to scramble from her job at the Department of Homeland Security to get a good seat for a Monday night revival meeting at her Baptist church in Landover, Md. Thanks to the furlough, however, she was there with time to spare.

She’s 58, and after 36 years in the government she’s been through some long shutdowns, but not this long. But she stays faithful.

“It is because of God’s grace and knowing that he is in control that  I’m able to keep my peace,” she told me. Meanwhile, “I keep watching TV for the news.”

A preacher at Clark’s church told me that the congregation created a fund to assist its members and wouldn’t charge tuition for furloughed federal workers whose children attend a Christian academy connected to the church. You may have seen the story of a synagogue in Chattanooga, Tenn., donating gift cards to furloughed workers with the Transportation Security Administration.

I would love to see Churches of Christ doing the same thing, and I’m sure there are some stories out there of our congregations helping out. But I hope we can do more than handouts. I hope there’s some way we can really let these people know that they’re not “nonessential” to us — and they’re definitely not nonessential to God.

They matter. We all matter.

Meanwhile, I’ll keep putting my hand over my heart, just like brother Ortiz, and asking God to answer all of our pleas — spoken and unspoken.

HAMIL R. HARRIS is a freelance writer who preaches for the Glenarden Church of Christ.

More in this category: