Use of the Olive Branch in our Logo

But if some of the branches were broken off, and you, although a wild olive shoot, were grafted in among the others and now share in the nourishing rootc of the olive tree, do not be arrogant toward the branches. If you are, remember it is not you who support the root, but the root that supports you.  Then you will say, “Branches were broken off so that I might be grafted in.”  That is true. They were broken off because of their unbelief, but you stand fast through faith. So do not become proud, but fear.  For if God did not spare the natural branches, neither will he spare you.  Note then the kindness and the severity of God: severity toward those who have fallen, but God’s kindness to you, provided you continue in his kindness. Otherwise you too will be cut off.  And even they, if they do not continue in their unbelief, will be grafted in, for God has the power to graft them in again.  For if you were cut from what is by nature a wild olive tree, and grafted, contrary to nature, into a cultivated olive tree, how much more will these, the natural branches, be grafted back into their own olive tree. -Romans 11:17-24 (esv) 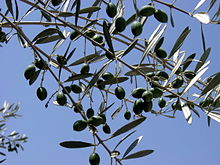 The olive branch is usually a symbol of peace or victory and was historically worn by brides. This symbol, deriving from the customs of Ancient Greece, is strongest in Western culture. However, it has been found in every culture and religion to thrive in the Mediterranean basin.

The olive branch appears with a dove in early Christian art. The dove derives from the simile of the Holy Spirit in the Gospels and the olive branch from classical symbolism. The early Christians, according to Winckelmann, often allegorised peace on their sepulchres by the figure of a dove bearing an olive branch in its beak.  For example, in the Catacomb of Priscilla in Rome (2nd – 5th centuries CE) there is a depiction of three men (traditionally taken to be Shadrach, Meshach, and Abednego of the Book of Daniel) over whom hovers a dove with a branch; and in another of the Roman catacombs there is a shallow relief sculpture showing a dove with a branch flying to a figure marked in Greek ΕΙΡΗΝΗ (Eirene, or Peace).

Tertullian (c.160 - c.220) compared Noah's dove in the Hebrew Bible, who "announced to the world the assuagement of divine wrath, when she had been sent out of the ark and returned with the olive branch". with the Holy Spirit in baptism "bringing us the peace of God, sent out from the heavens".  In his 4th century Latin translation of the story of Noah, St Jerome rendered "leaf of olive" (Hebrew alay zayit) in Genesis 8:11 as "branch of olive" (Latin ramum olivae). In the 5th century, by which time a dove with an olive branch had become established as a Christian symbol of peace, St Augustine wrote in On Christian Doctrine that, "perpetual peace is indicated by the olive branch (oleae ramusculo) which the dove brought with it when it returned to the ark." However, in Jewish tradition there is no reference to an olive branch in the story of the Flood and no association of the olive leaf with peace.

That the olive signifies the good of charity, is evident from the signification in the Word not only of an olive, but also of oil. It was with olive oil, together with spices, that the priests and kings were anointed, and it was with olive oil that the lamps were trimmed (Exod. 30:24; 27:20). The reason olive oil was used for anointing and for lamps was that it represented all that is celestial, and therefore all the good of love and of charity; for the oil is the very essence of the tree, and is as it were its soul, just as the celestial, or the good of love and of charity, is the very essence or the very soul of faith; and hence oil has this representation. That oil signifies what is celestial, or the good of love and of charity, may be confirmed from many passages of the Word; but as it is the olive-tree that is mentioned here, we will merely present some passages that confirm its signification. As in Jeremiah:--

His branches shall spread, and his honor shall be as the olive-tree, and his smell as of Lebanon (Hosea 14:6),

which is said of the church that is to be planted, whose honor is the olive-tree, that is, the good of love and of charity; the smell as of Lebanon, being the affection of the truth of faith therefrom. Lebanon" stands for its cedars, which signified spiritual things, or the truths of faith. In Zechariah, speaking of the lampstand:--

Two olive-trees by it, one upon the right side of the bowl, and the other upon the left side thereof; these are the two sons of the pure oil that stand by the Lord of the whole earth (Zechariah 4:3, 11, 14).

Thy wife shall be as a fruitful vine in the sides of thy house; thy sons like olive-plants (Ps. 128:3);

where wife as a vine, denotes the spiritual church; sons the truths of faith, which are called olive-plants, because from the goods of charity. In Isaiah:--

Yet there shall be left therein gleanings, as the shaking of an olive-tree, two or three berries in the top of the branch (Isaiah 17:6);

where the subject treated of is the remains in man; of an olive-tree, denoting celestial remains. In Micah:--

where the subject is the abundance of doctrinal teachings about the goods and truths of faith, which by reason of their character, those people rejected. From these passages it is evident that a leaf signifies the truth of faith, and an olive the good of charity; and that like things are signified by the olive-leaf which the dove brought in her mouth; that is, that there now appeared in the man of the Ancient Church some little of the truth of faith from the good of charity. 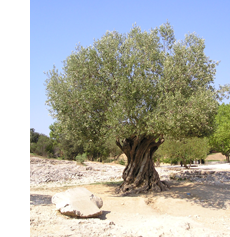 Even today the olive tree has retained its symbolic power amongst the different cultures and nations.